(May 4, 2017) — The Queens Economic Development Corporation on May 2 announced that a pizza maker and manufacturers of dolls and swimwear won this year’s StartUP! Business Plan Competition, an eight-month challenge-and-instruction course. Thanks to funding provided by the Citi Foundation, each team was awarded $10,000.

Nicole Russell, who makes frozen and fresh pizza in Rockaway’s Arverne, took top honors in the “Food-Based” category. Her company, Last Dragon Pizza, is named after her favorite martial arts fantasy film, which is also the inspiration for some of her specialty pies. For example, the Sho’nuff, which has provolone, mozzarella, Parmesan, steak, green peppers, and white onions, pays homage to the film’s main villain. The Kiss Mi Converse, one of Sho’nuff’s famous lines, has spicy jerk chicken, yellow peppers, scallions, white onions, and black olives.

Laken and Carlissa King prevailed in the “Innovation” category. The identical twins run Bayside-based Elle & Cee World Girls, which manufactures 18-inch, fully outfitted, female dolls, such as Zari, an 11-year-old from Barbados who loves to explore. Other figurines include Maud, also age 11, who hails from Germany and speaks three languages. Pemberly is the same age as the other two, but she’s from the United States and loves to read.

From September 2016 to May 2017, more than 300 StartUP! participants received technical assistance and training on such business topics as operations, marketing, and financial statements, while also enjoying access to entrepreneurial resources at Queens Flushing Library. In total, 25 teams submitted business plans to selected judges, who determined the winners.

QEDC would like to express sincere gratitude for Citi’s help in making this impactful, extremely beneficial program possible for the past 11 years. Resorts World Casino New York City and Bridgehampton National Bank will fund the next StartUP!, which is scheduled to begin this September. 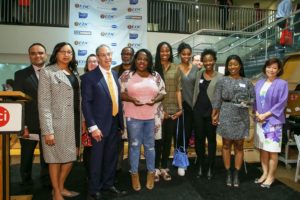 The mission of the Queens Economic Development Corporation is to help small businesses.  In view of the Coronavirus, we are taking the following steps:

If you have any questions or concerns please contact us.  Be careful, help those who are vulnerable and wash your hands.

Fuel the Front Lines is an initiative of Acting Queens Borough President Sharon Lee, Queens Together, Queens Night Market and the QEDC to help to meet the needs of front line healthcare workers, other emergency responders, and Queens communities in need through partnerships with local independent restaurants and food businesses. We will fill the urgent need for nourishment while at the same time providing a lifeline to the small businesses that define our neighborhoods. Make your tax-deductible contribution and help us deliver good food made with love by workers in Queens, for people in Queens.